In November, 2014 I was speaking with Asghar Farhadi while he was in Brisbane, acting as Jury President for the Asia Pacific Screen Awards. He told me that he had just spent most of the year in Malaga, Spain, resting and writing screenplays, after some very busy years following the success of his film “A Separation”. That break-out work of cinema won many awards around the world and topped its achievements off with the Academy Award for Best Foreign Language Film. He had also made “The Past” in France, before his Spanish getaway. Mr Farhadi told me how much he loved Spain, and added, “Oh, the music! The dancing!”
Since then one of those screenplays, “The Salesman”, a story set in Iran, won him a second Academy Award for Best Foreign Language Film. Then at last it was time for him to return to his beloved Spain, in August 2017 to shoot the second of the screenplays he wrote there – “Everybody Knows”.
I wholeheartedly agreed with his love of Spanish culture, and was reminded of his remarks again today while watching his latest film, “Everybody Knows”, set in Torrelaguna, a small Spanish village to the north of Madrid and starring Penelope Cruz, her real life husband, Javier Bardem, and the much respected Argentinian actor, Ricardo Darin.
Penelope Cruz plays Laura, a woman who grew up in the village, who returns with her two children, from Argentina for a family wedding. Her husband Alejandro, played by Ricardo Darin is not with her, and doesn’t appear until about half way through the film, after a crisis occurs and she asks him to come. Returning home to her parents, and siblings and the extended family, she also meets up with her first love, the local man Paco, played by Javier Bardem. They haven’t seen one another for sixteen years, and he is happily married, as is Laura. However, if you come from a small village, you are never really free of the past and the village knows all, hence the film’s title.

There is a joyous family reunion, preparations for the wedding, the wedding itself, and the party, and then suddenly the mood changes, and film becomes a ‘domestic mystery’. While the first part of the film is showing us the delights of Spanish family life, music, dance and celebration, we are actually being ‘fed’ pieces of information that may seem unimportant at the time, but later will tie up many linkages and explain everything – so pay attention. So as not to write any ‘spoilers’, I will not talk about the story. It is best if you go along, completely ‘in the dark’.
Suffice to say that Asghar Farhadi has written another of his unique screenplays, which explore the minutiae of family and close-friend relationships, especially when the situation involves a small town where everybody knows. His screen-writing is unmistakable, and his ‘fingerprints’ and ‘thought-prints’ are all over it.
There were certain small similarities relating to personal relationships, that have also been in most of his former films, going back to “About Elly” (2009).
Because of the Spanish setting, and an obviously bigger budget than usual, and because the film is not made for the Iranian market, it is far less claustrophobic than his films set in Iran, where the women are wearing head scarves, (even in their homes) and somber covered-up Islamic clothing required by Iranian censors. For the wedding party scenes Farhadi has been able to ‘let his hair down’ and the women are wearing colourful and by Iranian standards, revealing clothing. The wedding singer has a backless dress, many of the guests have bare shoulders and plunging cleavage. This is not normally something I would even mention, but it is unusual in a film by Asghar Farhadi and the reason why the film feels more expansive and ‘international’. The wedding party features wonderful music and dancing – flamenco touches abound and that is where I was reminded of him telling me how much he loved that, back in 2014.
The first part of the film moves along at a brisk pace. There is a lot to tell us, and he has to do it without making us feel as if we are being primed. The editor has done a fine job and the actors too. After the wedding celebration, the whole pace changes, and so does the mood.
We are in the same situation as the protagonists, trying to solve a mystery, and although we don’t feel as anxious as they do, which I think may be the only short-coming with this film, we are busy trying to concentrate on what we’ve been told, what we are learning now, and figure it out.
I think that this film for the world market, but set in Spain, has proved what some people have been wondering, including myself. Could Farhadi leave behind his culture, his country, and the intimate knowledge of the way things work there, and make a totally non-Iranian film? ( Six out of his total of eight feature films have been made and set in Iran.) Well, he can! He did so with “The Past”, set in Paris, featuring only a minor link with Iran, through one character. He has definitely demonstrated his skills here, particularly the screen-writing, and to tell his story he has used the aspects of his characters’ lives that are not ‘Iranian’, but ‘human’. Anywhere, and everywhere, some things are always the same. Small towns, multi-generational families and their dynamics, past love affairs, young love, the way events of long ago are not forgotten, and memories do not stay buried. When a stressful situation arises, old resentments bubble up to the surface and muddy the waters. To sort things out, even the most deeply buried secrets must be revealed.
We have here a world class director, working with three world class actors, who are backed up by an excellent Spanish supporting cast.
I particularly liked the closing scene, where more secrets are being buried, to perhaps bubble up to the surface at some time in the future. This is a masterful screenplay, and one worthy of Asghar Farhadi’s reputation as a Maestro of the cinema. 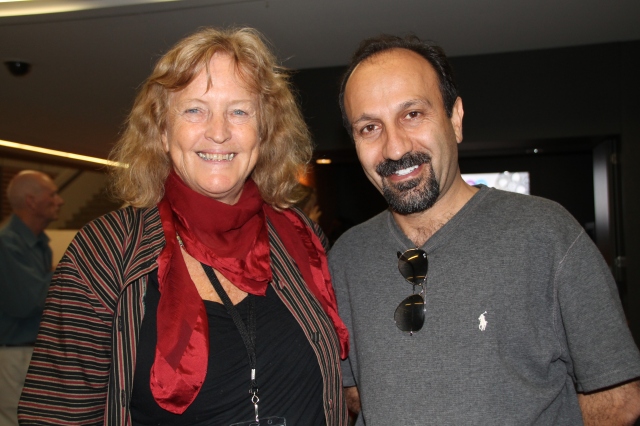 Copyright: Cynthia Webb, March, 2019
Poster: thanks to the Producers
Photo: thanks to Sunita Jariwala for taking the photo of Asghar Farhadi and me during our conversation in November 2014 in Brisbane, Australia.