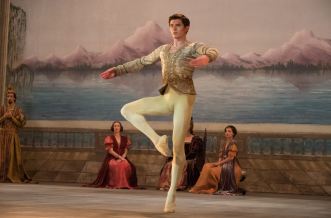 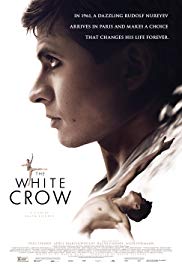 The White Crow (belaya vorona) is a Russian expression for a misfit, a non-conformist, one who stands out from the crowd.

This was certainly Rudolph Nureyev. His character was like that, his background was one of struggle, born on the Trans Siberian Express near Irkutsk, growing up hungry in wartime, with loving mother, and absent father. His Muslim parents were of Tatar heritage – (inheritors of the blood of Mongol conquerors of the 12th and 13th century). His childhood was spent in Ufa, with three older sisters, an outcast amongst the other children, wearing ragged clothes and often on the sidelines.

At age seventeen, Rudolph (Rudik, his mama calls him) came to Leningrad (now St Petersburg) to try to catch up on years of dance education, and was in the care of ballet master, Alexander Pushkin, played by Ralph Fiennes, who is also the director of this film. He had had some dance instruction since a young age, and there are some precious scenes near the end of this film, of the little Rudolph performing traditional dance, based on a Russian story. He learned to have great belief in story, advised by Alexander Pushkin that it should be expressed in one’s performance and Rudolph believed also in one’s own destiny.
Rudolph is profoundly determined, self confident, and ambitious, and works hard. In Leningrad, his innate talent is noticed immediately, but time must be spent on refining his wildness. Rudolph worked extremely hard to catch up on all that he had missed. It could be said, that in dancing, the refining process more or less worked, but not in his personal life. He later danced with considerable technique, but fortunately for Ballet-o-manes of the world, they didn’t crush his wildness, which seemed to be the thing that audiences felt, appreciated and adored.

He was offered a place in the Kirov Ballet, narrowly avoiding being sent by the Soviet government, back to the small town of Ufa from which he came, presumably to teach dance, and ‘give back’ to the people of the Soviet Union who paid for his education up until that time. Intervention from high places saved him, (the director of the Kirov) and the prima ballerina Natalia Dudinskaya who wished to have him as her partner, for their mutual benefit.

In 1961 the Kirov Ballet toured to Paris and London. It was the first time Kirov Company had ever performed in the West. The ballet company was in Paris for five weeks, escorted and watched by KGB men. It was risky, sending a large group to the West in 1961, the height of the Cold War. Presumably the Soviet government gave approval, in a conflicted way, knowing it was dangerous, but wanting to show their enemies The West, just how cultured they were. This was definitely true. Ballet was invented in France, but it was Russia that perfected the great art, and no-one argues with that, then or now.
Rudolp Nureyev was a strong individualist, and longed for freedom in a most powerful way. He knew he was the best, and he wanted to show the world. His rebellious personality was so much ‘the individual’ that he was made for Capitalism/Freedom, and living in the Soviet Union’s culture did NOT suit him at all. There, he was certainly the misfit, the White Crow.

In Paris, the 23 year old dancer won the love of the audiences, and made friends. He went out with his new French friends every night and every day to see the great culture of France, in Museums, and in cabarets and including gay clubs. The French awarded him with their coveted Nijinsky Medal of Honour. They saw him as the new Nijinsky, a dancer who had set Paris alight back in the Twenties, when the Ballet Russe performed there. He met a young woman, Clara Saint, who was close to the family of high level politician and novelist, Andre Malraux, and seemed to know everyone who was anyone. They became close friends. Nureyev was gay, and he was arrogant, proud, and sometimes rude. He’d learned English back in Russia, but sometimes he didn’t use it well. However, she forgave him everything and played a leading role in the success of his tense and terrifying defection at Le Bourget Airport, as the company was leaving for London.

The film shows the tense drama at the Airport as being set off by his KGB minder telling him that he wouldn’t be going to London with the Kirov Company, but must return to Moscow to perform. When he refused another excuse for why he should do as they told him, was explained to him, in an attempt to defuse his resistance. But suspicious Rudolph resisted, and panicked. One of his French friends, at the airport to see him off, intervened, made a phone call to Clara Saint, she came as soon as she could, and talked to the airport police, who soon intervened. Rudi was saved at the eleventh hour, by the laws of France relating to people who request political asylum.

This story is well known by almost everyone across the world, as it was in every newspaper, on every television screen, and talked about ever since. It was a disaster for the Soviet Union, and a triumph for the West in the propaganda war.

The film implies that he wouldn’t have defected in Paris, if the KGB hadn’t tried at the last minute to get him separated from the company and returned to Moscow. Their reason was that they knew he’d been out and about so much in Paris and was loving every minute of it far too much. They suspected he might be planning to defect. However in the film the defection in Paris is shown as something, unplanned, but forced upon him by crisis at the airport as the other dancers left to go to London. After the event he was declared a traitor to his country, and he thought he would never be able to return. In fact he was allowed to return 26 years later for a visit.

One of the beautiful parts of this film is in the flash-backs to his life in the Soviet Union, and to his childhood. These scenes are extremely real and genuine looking, and show just how much he has to give up, to renounce, leave forever, by defecting….the good as well as the bad. He is a man caught between his love of his family, friends, and Mother Russia, and on the other alternative, his powerful individualist’s nature and dream of showing the world what he can do on their ballet stages. Russia’s great and fine heritage and history is a force to be reckoned with, and Rudi must make a choice In with nothing but a glass of cognac to help him, during 45 minutes alone in the police room at the French airport.
We all know the result.

As cinema, this is a fine piece of work by Ralph Fiennes, who is more recognized as an actor, but has directed several fine films. His education and love of art and culture is evident in all of them. In his own scenes in the film he speaks Russian.

There are no extravagant scenes of ballet performances, and this aspect of the story is handled in a more subtle and lonely kind of way. We see Rudolph Nureyev on the stage still standing isolated ( as in childhood) … or watching from back stage. He is portrayed as deeply thoughtful, with great artistic sensitivity, immense intelligence and self confidence that cannot be ignored, by himself or anyone else. He is shown observing everything that happens around him – what does it mean, is it useful to his ambitions? However, sometimes his pride over-rules everything and he says and does things that could bring him undone. He is saved by his immense talent, clearly evident to all who see him dance.

The role is played by an accomplished Ukrainian ballet dancer, Oleg Ivenko and he has done a fine job, with both the dancing and the acting. The personality of Rudolph Nureyev as shown to us by Oleg Ivenko and the director Fiennes, dominate the entire film, as indeed it should.

The writing by the maestro David Hare is sublime.
Locations and art direction and cinematography are very fine. The film has been made in Serbia, France, Croatia and Russia, and it is nice to see that the Executive Producer was Liam Neeson.

Clara Saint a solemn young woman in mourning for her boyfriend, son of Malraux the writer and politician, is played by Adele Exarchopoulos, (remember her from “Blue is the Warmest Colour”).

Russian actress Nadezhda Markina plays a small role, as the Government official who tells Nureyev, in no uncertain terms, that he is just a small cog in the big Soviet wheel, and must leave Leningrad and return to his remote hometown and pay back his debts in contribution to Soviet culture. She has been seen in the films of renowned director , Andrey Zvygintsev and has visited Gold Coast, Australia for the Asia Pacific Screen Awards, when nominated as Best Actress in “Elena”.

“The White Crow” is the perfect title for the film, which tells an enthralling story of the 20th century, and shows us the type of man Nureyev was, to make him brave enough and able to do such a drastic and terrifying thing, at that Paris airport in 1961.

Portrait by Sanden Senior, (Assoc Press) of the real Rudolph Nureyev in 1961 the year of his defection.