Posted on December 1, 2015 by cynephilia 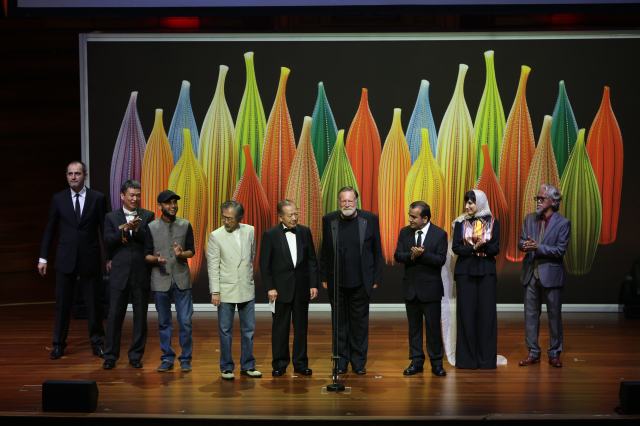 It’s the second year that these two events have been teamed up and the idea is a good one because it enables the public to see most of the films nominated in The Asia Pacific Screen Awards (APSA), plus a selection of other films from the region, which includes 71 countries, and a population of about 4 billion people.

The Nominations Council (who have to sort through 300-400 submissions) and the Jury, who view and discuss at length about 39 nominated films, are instructed to bear in mind that APSA’s philosophy is to recognize films that best express, display and communicate the culture from which they come. There are also special awards from UNESCO, and from FIAPF (International Federation of Film Producers Associations), and there are categories for short films and documentaries, and animation films too.
The November 2015 APSA was in its ninth year, after starting at Gold Coast in 2007, when it was supported by the Queensland State Government. The concept came from the first Chairman of APSA, Mr Des Power. The structure of APSA is similar to The Academy Awards of Hollywood, – it’s a film awards event and only in the last two years has had its accompanying film festival.

When a change of political climate came, with the election of Campbell Newman’s State Government, APSA was no longer funded from the State coffers. There was some insecurity and worry, during the 2013 APSA event. However, riding to the rescue came the far-sighted people from The City of Brisbane (City Council), with a promise of financial support to enable APSA to continue.

It makes sense, as Brisbane is also the home of the Asia-Pacific Triennial of Contemporary Art, taking place right now at the Gallery of Modern Art. Also Brisbane is located in the ‘tropical north’ and as the State capital, has strong links with the Asia-Pacific islands, communities and nations to our north and east. It is our region. We eat the same tropical fruit, and frolic in the same ocean. We suffer the same cyclones, and occasional heat waves. In many ways, we have more in common with the Asia-Pacific region, than we have with the Australian cities to the south.

Since the beginning, APSA has been building an Academy made up of film-makers whose films have been nominated or awarded at APSA, and also the members of the Nominations Council for and the Jury members for each year. Now, the list numbers about 1000 and names include some of the most highly regarded film-makers in the world today.

Much loved Australian actor, Jack Thompson is the APSA Academy President and says how proud he is to have this role, and to attend APSA each year. When Jack speaks, in his sincere and authoritative and unique voice, everybody pays attention. He mentioned that an Academy should be of benefit to its members, exchanging, exploring and providing opportunities for one another.

There is also an adjoining project, with Griffith University Film School, – “Asia Pacific Screen Lab”, which was launched at APSA 2014, and is administered by Herman Van Eyken, Philip Cheah, and Ki Yong Park. Each year applicants are selected, to be mentored during early stages of their projects, by the APSA Academy members best suited and located for the successful film-makers.

In the Asia-Pacific region there are many city film festivals, but APSA is the only event that casts a wide net across the entire enormous region – one third of the surface of our planet, the fastest growing region economically, socially, which includes seventy countries. There is a huge variety of cultures and through cinema these cultures may all communicate, share their similarities and their traditions.

The present Chairman of APSA, Michael Hawkins called film-makers, “the philosophers of our time” in his speech at the APSA ceremony, and to a large extent this was evident in the films that were nominated for awards. Watching the films of this region, one learns so much. We can also empathise with people from remote places we know nothing about, because we usually see that everywhere, everybody has the same joys and sorrows, the same life challenges, and the same simple desires – just those basic human rights to security, enough to eat, a decent life, and a loving family, and circle of friends. We can also look through time and space into cultures that are still living traditional lives, but where modernity is rapidly advancing on their previously simple lives, linked strongly to nature.

I saw the same factors in the wider group of films chosen to screen in the Brisbane Asia Pacific Film Festival. What a privilege to have a chance to see these films that speak to and from the hearts of people in our region.

APSA winners get a big boost for their film on the international market and sometimes films first internationally recognized ( even in script development stage) or awarded at APSA, go on to win the world’s most famous awards. The best example of this is Asghar Farhadi’s “A Separation” (Iran). The director submitted his concept for that film in the hope of being awarded one of the APSA/MPAA grants of $US25,000. At that time his earlier film “About Elly” was in competition, and was awarded one of APSA’s highest prizes. He also went away with his funding, and came back the following year, with the completed film which duly won the highest award at APSA, and later made history by winning the “Oscar” at the Academy Awards, in Best Foreign Language Film Category. (The first Iranian film to do so.) More or less overnight, Farhadi went from being a leading director in his own country, but unknown to the rest of the world, to being referred to as an international Maestro of the Cinema.

Here in Australia, we’ve always had the opportunity to see films from USA and from the UK, and if we were trying harder, we could seek out European films. It has all been valuable film-life experience. However, we Australians live in the Asia-Pacific and we need to get to know our neighbours, and the wider region that we belong to. The world is rapidly “shrinking” in contemporary times, with so much travel, cultural exchange via international study, and business, social networking and of course other aspects of the internet. Events on the other side of the world, affect us right here, immediately. What better way to get familiar with the wider world, than to watch the amazing films of the Asia-Pacific, where half of the cinema of the world is created?

At the end of the APSA Ceremony, film director/Master of Ceremonies Anthony Chen, of Singapore said, “The world population speaks six and a half thousand languages, but cinema unites everyone.”

If you are a serious film-lover but don’t live in Brisbane, consider planning a trip to Brisbane, Queensland, in 2016. It will be APSA’s tenth anniversary, and you can have a movie-binge of unusual and inspiring cinema. If you are a film-maker of the Asia-Pacific region, and you think you have made a good one, consider submitting it to APSA or to the Brisbane Asia-Pacific Film Festival, 2016.