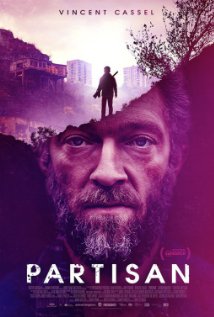 Watching this film, there is no way to know that it is an Australian-made film. It stars a French superstar, Vincent Cassel, and a group of accented English speakers, who seem “international”. This is deliberate and works well for the message that this enigmatic film  wishes to communicate to us.
Shot in Tiblisi, Georgia, and Mt Eliza, Victoria, Australia, this film goes out of its way to tell us only a minimum of information. The small group who live in a kind of commune, led by a charismatic male leader that the West has seen many of, consists of a well educated, highly opinionated Gregori, and his harem of lovely women and nice children. He is bringing them up to be survivors, but  to be something more sinister too.. assassins.

They live in a hidden location on the outskirts of a kind of “wall” of high rise buildings,  a grey and worn looking city which is known as “outside”.
We get the impression there has been some kind of mass destruction… it doesn’t matter what, because the subject of this film is the extreme folly of trying to control people, events, and maintain that control. It never, ever works.
Gregori begins to appear to be a hypocrite to his beloved son Alexander, who is entering puberty and gets a sort of revenge-ritual task (that he does but which breaks his heart) to mark his transition to manhood.

Alexander is smart, quiet, watchful, and he already knows that Gregori is beginning to resort to any lengths to maintain control. To emphasise the situation, Alexander now feels very protective towards his new-born baby brother Tobias… and we can see that he is behaving in the same way that his father may have initially behaved to protect him, when he was very young.

What children experience, is  usually what they imitate. What we are taught in the early years, may well affect the rest of our lives. It is interesting to note, that Julian Assange, once lived inside a Cult in Australia, along with his parents. His mother took him and escaped, pursued by his father, when he was at about the same age as Alexander in the film. The mother and son had to hide for some years, while his father hunted for them and tried to get them back to the clutches of the cult leader, who in that case was a woman who was biased towards blonde and aryan looking children. No wonder Julian’s life has panned out as it has –with him so suspicious of everything and always committed to the exposure of Truth at all costs.

One moral of this film “PARTISAN” is that Cults are always bad, and Cult Leaders are never the new messiah, or even a longed-for leader that can solve all of life’s problems for the followers. They are just fallible human-beings like everybody else, and the whole thing is going to end in tears or worse – as has happened since the days of Charles Manson and quite a few other cults that ended in real life mayhem, suicide and death.

The ‘other’ moral of the story is human beings cannot ever have total control of life and minds, either their own, or those of others.
The small community of the film “Partisan” which has obviously begun with good intentions, is on the road to ruination. Things are unraveling rapidly as the children grow to an age where they begin to think for themselves.

Gregori’s little “Family” can be seen as an microcosm of all of Humanity, and we must all take this allegorical warning lesson very seriously.
(text by Cynthia Webb, copyright, November 2015)