“Far From The Madding Crowd” (2015) directed by Thomas Vinterberg

Posted on September 1, 2015 by cynephilia 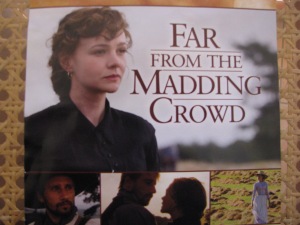 “It’s difficult for a woman to define her feelings in a language chiefly made by men to express theirs,” says Bathsheba Everdene – the heroine of Thomas Hardy’s 1874 novel, “Far From The Madding Crowd”. The 2015 re-make film by Denmark’s Thomas Vinterberg has the heroine say these words, which define his modern take on the character. She is far more of a feminist and 21st Century-girl than the Bathsheba played by Julie Christie, in the 1967 John Schlesinger directed version.
Vinterberg’s Bathsheba doesn’t primp and preen in front of the mirror, and goes about her work and business in a matter of fact way. She has a lot of self-esteem and confidence. She doesn’t mind getting into the sheep dip to work beside her male employees, even if she does do it to impress her shepherd and first suitor, Gabriel Oak, the first of three men to propose to her.
Gabriel Oak, is played by Belgium’s Matthias Schoenaerts, who is an actor rising rapidly to stardom, and who is always reliable and often brilliant. He also has great versatility – compare his characters in “Bullhead” or “Rust and Bone” to this one, and that point is amply demonstrated.
Bathsheba is wilful, headstrong, and capable. She cannot see any reason why she’d want to marry and become someone’s property, particularly after she inherits a very nice house and farm from her uncle.
Bathsheba is played by Carey Mulligan, whom we’ve seen a lot of lately, (“The Great Gatsby”, “An Education”) and she too is always superb.
The three suitors portray three different types of men: Gabriel Oak, steadfast (like his name) reliable, honest, hard-working and proud. Mr Boldwood, the older wealthy man of impeccable character, who is a pillar of local society, and the flashy, self-centered and rather dangerously unpredictable Captain Francis Troy,(Tom Sturridge) wearing a “don’t trust me” moustache, a dashing army uniform and slashing his sword about. The red jacket looks stunning in the surrounding green forest, on the morning when he has a rendezvous with Bathsheba, and sexually assaults her, with a grab and a kiss, after showing off his swordsmanship skills. Worse still, Bathsheba falls for it!
Hardy’s book seemed more interested in which one she should choose, whereas the film is concentrating on Bathsheba herself – who she is and what aspects of her character are causing her to do the things she does. Pride is almost her undoing.
Thomas Vinterberg, the also dashing young Danish director, who was born in 1969, was a co-partner with Lars Von Trier, in the “dogme95” movement. For those who are not familiar with it, the idea was to make films to a set of concepts aimed at reintroducing an element of risk in film-making. It seemed to me that they dispensed with all technical aids and conventions, tripods, lighting, even sets. Some of the films were difficult to watch, – jerky camerawork, and a Spartan look, and some plots that pierced our expectations, formed by our previous film experiences.
Now, with “Far From the Madding Crowd” (and also “The Hunt” 2012) Vinterberg has departed from dogme95 and returned to the classical film-making mode, taking advantage of every kind of aid and technique that could help it to be so. It is in no way challenging, or surprising. The story telling is chronological, and it is apparently as true to the source material as a film can be, given the limited time available. He has made a truly graceful and perfect traditional film.
It is difficult if not impossible, to find any fault. My only quibble is that it would have been good to have a little more exposition of what went on between Bathsheba and Captain Troy, before the wedding scene, to make this determined refuser of marriage proposals, suddenly smile and say yes. Just the grope in the woods, the flashing swordplay and the kiss, were not quite enough, compared to the screen-time that was given to the other two suitors. There is an enjoyable contrast between Gabriel Oak and Mr Boldwood (played by the always fine, Martin Sheen.) These two have a revealing scene, which Boldwood completes by saying “I think we two understand each other.” Both of them are in love with the same woman, and know it, and yet have mutual respect.
The design, art decoration, costumes are all gorgeous. The cinematographer, Charlotte Bruus Christensen has done superb work. She has used the late afternoon golden light, with sun low in the sky, to romantic effect. She came in close for the conversations between Bathsheba and Gabriel, which works persuasively on the audience who are always hoping that he will win her hand. Whereas, for Bathsheba’s talks with Mr Boldwood they are shot from further away and stand further apart. Bathsheba even sits at the other end of the table from him.
The wheat harvest scenes recall trips to a London art gallery, or pages of art books where we saw the paintings of John Everett Milllais, a member of the Pre-Raphaelite Brotherhood and a contemporary of author Thomas Hardy. The scenes are surely based on the study of artworks of the period.
The costumes worn by the heroine were always impeccable, and a joy to behold, particularly the crimson hat and gown in which she drove her carriage away from her old home, to take up residence at her newly inherited farm – expressing her confidence, strength and ambition to succeed in her own right.
I feel confident that there will be few or no English language films as good as this one this year, and so I expect BAFTA nominations to be showered upon this work… a literary classic, made into a classic film. Perhaps if we are lucky there may be an equal, but this work is difficult to improve on. It’s interesting how a foreigner can see another culture with such clear and true vision. The French filmmaker Pascale Ferrari’s version of Lady Chatterly (2006) or the Ang Lee version of “Sense and Sensibility” (1995) come to mind.
(Copyright August 2015, Cynthia Webb)