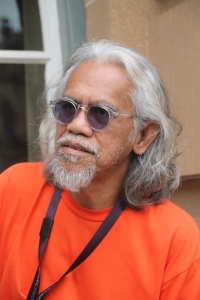 Tomorrow is going to be a difficult day for me, said U-Wei bin Haji Saari.
When asked why, he answered “because I don’t like competing.” He referred to a day back near the endof 2013 during which the Jury of the Asia Pacific Screen Awards was deliberating their awards, for thirty-nine nominated films.
He was nominated in Best Screenplay category, for his adaptation of a Joseph Conrad novel, “Almayer’s Folly”. The subsequent film he directed is entitled, “Hanyut”.
We spoke in Brisbane, sitting on a park bench under a large bronze statue of Queen Victoria, and surrounded by Victorian architecture, an apt symbol of colonialism – and a link between that place and the film U-Wei has made. Both Australia and Malaya were colonized by the British.
U-Wei was still wondering how it happened that he was actually in Brisbane for the Asia Pacific Screen Awards at all. His screenplay for “Hanyut”, was nominated but he said he did not submit his film and doesn’t really know who did, but ‘had his suspicions.’
He knows what a jury at a film event goes through, because two years earlier he was on the Jury at the Sundance Film Festival.
This now 60-ish Malaysian indie film-maker has Indonesian parents, from the Minangkabau culture, who went wandering (“merantau”) to seek their fortunes. He was born in the State of Pahang, Malaysia, and grew up in a small town which he said was “the best small town because it had a lot of cinemas.” From his early years he watched a huge variety of films from the USA, UK and India.
Discussing his film’s title U-Wei said that the Malay word hanyut has no satisfactory English equivalent, because it means wandering, lost in dangerous territory but with no hope of return or recovery of what was before.
He said, “All of the characters are in this condition.”
The setting is around 1830, in British Colonial Malaya, and Almayer is a middle aged white man of Dutch parentage, who was born in Malaya and has never been to Holland. For twenty years he’s lived in his large house up river in a jungle location, with his Malay wife, their daughter, and obsessed by his dream of finding a lost treasure that he’s heard of, and taking his daughter to Holland. When she becomes an adolescent he sends her off to an English school in Singapore, much to the despair of the girl’s mother, who becomes a little mad, but still remains very shrewd. She scorns her husband and his unrealistic ambitions. When the girl’s schooling is complete she returns on a river steamer, appearing unexpectedly, an apparition clothed in white, transformed and calmly standing beneath her parasol. Her father welcomes her, delighted. However, U-Wei said, “She returns to him damaged, because she is now split between two cultures. The white filmy clothing is like bandages on her wounds.”
Her father assures her that he will soon find his personal obsession, a legendary fortune, and take her to Holland where she will marry a fine gentleman. She is more realistic and argues that she will not be accepted there, because she is half Malay.
Enter a handsome Malay prince from another island, who may know the location of the treasure, but finds a more desirable and accessible treasure the moment his eye falls upon the lovely girl. She loves him too.
There are numerous other players in this multi-cultural situation, Arab traders, pirates, a local village headman and the village people. Everyone is manouvering towards their own particular interests, and most of them are facing a state that could be described as ‘hanyut’ because their world is being corrupted through outside influences, such as trading and colonization. Nothing will ever be the same again.
U-Wei has presented the setting and events in a very realistic way, careful not to “exoticise” everything. He deplores that particular tendency when he sees it in other films, and wanted his film to be as authentic as possible. However he has allowed the dialogue to be in today’s style. “I don’t know how they spoke then,” he said.
At the time of our meeting, the film hadn’t yet been released in cinemas in Malaysia. When asked if it would later appear on Malaysian television U-Wei replied that he is now wary of TV. “My films are like my children and I don’t want to run the risk of them being ill-treated.” However, he will make a film for TV if commissioned, and TV channels are still holding some of his earlier works.
When asked about the situation for film-makers in Malaysia, U-Wei said that he felt that many directors there did too much complaining about difficulties, when in reality this is not entirely factual. “Perhaps they pamper themselves a little too much,” he said.
He told me that to make a film in Malaysia, one may write a screenplay, make the film, and only then must it be submitted to the censors, as in most Western countries, however not possible in neighbouring Indonesia, for example.
Around twenty years ago, he himself actually had an argument with the censors when they wanted to censor the title of his film, which contained the word ‘whore’ (jalang, in Malay). “It was as if they didn’t want to admit there could be such a woman in Malaysia,” he laughed.
“Hanyut” is a fascinating film, joining two previous versions of Joseph Conrad’s “Lord Jim” and “Max Havelaar” (a Dutch film by Fons Rademakers, about colonial Java), and “Indochine” (France, directed by Regis Wargnier), showing us colonial times in South East Asia. It’s an interesting but not often visited time and place for film-makers to explore further, considering the exotic people and cultures and the upheavals that have occurred there during the last five hundred years.
(Copyright, text and photos – Cynthia Webb)