BRANDO – his legend will never die 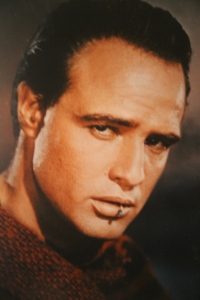 Marlon Brando – an extraordinary life
Cynthia Webb, Gold Coast, QLD, Australia
Some famous people become such legendary figures that we forget that they are only ordinary people, just like ourselves.
One of the brightest stars in the Hollywood Constellation was Marlon Brando. Why?
A newly released documentary film, “Marlon Brando – An actor named Desire” (2014) directed by Philippe Kohly explains how Brando’s drew upon his inner suffering to become the man who many call the greatest actor who ever lived. It’s been ten years since his death at the age of eighty, and Mr Kohly’s film explores Brando’s life, and explores how his very tough childhood and adolescence made him into the raw and sometimes explosive actor that he was.
Marlon Brando blazed onto the screen in 1951. He introduced an entirely new style of acting for screen. Of course it was the right style, because the camera and the big screen register every tiny nuance, and record every torment. Brando knew how to wring emotion from pure silence, and subtle facial expression. When he smiled, the screen lit up.
He acted so much like a “real” person, that his first screen performance in “A Streetcar Named Desire” (1951) stopped everyone in their tracks. He had performed the same role, in at the Schuber Theatre, on Broadway two years earlier, at the age of 23, where he amazed audiences and critics alike, and became the talk of the town. In both performances, he was directed by Elia Kazan, who had the vision to see that Marlon had something utterly authentic. He didn’t act the part, he lived it.
This was for two reasons. He had been thoroughly trained by Stella Adler, who learned her acting craft from Konstantin Stanislavky, a Russian drama teacher. It became known as “The Method” – which showed actors how to draw on their emotional memory. Brando was a natural for the “Method” because he had plenty of emotional memories bottled up ready explode, when he arrived in New York and worked as an elevator boy, with no real plan for his career. However it just happened that he worked close to Stella Adler’s acting school, and wandered in there, not really knowing he wanted to be an actor, but following a lot of pretty girls who went there.
Marlon was always powerfully attracted to beautiful and exotic women, and they to him. This factor defined his life in another way.

He had fled a difficult childhood and adolescence, growing up in Omaha, Nebraska, youngest of three children. Their father was usually absent, a travelling salesman, and their mother was a disillusioned and desperate drunk. She had once been an actress in Omaha theatre and had quite a reputation for her talent, but gave it all up to marry Marlon Brando senior. The disappointments of married life destroyed her, and while the young Marlon was growing up, he became his mother’s keeper, often seeking her out in bars after school, finding her drunk and bringing her home to some kind of safety. By the time he was twelve, was threatening to kill his violent father, during the marital arguments.
The young Marlon Brando adored his mother, Dodie, and spent his entire life trying to get her attention, however his lifetime friend George Englund says that Marlon always hated his father.
According to the new documentary film, everything he did was for his mother, who once said, “You haven’t done anything if you haven’t done Shakespeare”. For her, he even accepted the most terrifying challenge of his career – to play Mark Antony in “Julius Caesar”, (1953) in Shakespearian English. Marlon had dyslexia, a brain condition which causes reading to be extremely difficult, because the letters in words appear to be muddled, so learning Shakespeare’s text and assuming an English accent was a huge achievement.
To play a role with England’s most famous Shakespearian stage actors, was a huge risk, but Marlon triumphed, by using his “Method”, whereas they still acted in the traditional way.
Several of Marlon Brando’s closest friends also say that he was a genius, that his mind was “glorious” and “brilliant”, and that he had a wonderful sense of humor.
In 1953 came “The Wild One” again directed by Elia Kazan, when Marlon defined the new American male, rebellious and free, in black leather. Nothing could stop him now.
Next was Kazan’s “On the Waterfront”, (1954) where Marlon played dockside worker Terry Malloy. Marlon won a Best Actor Oscar for “On the Waterfront” and he used it as a doorstop, such was his scorn for the Hollywood Establishment. He had never respected the profession of acting, but it was the only thing he knew how to do. In his later years he is seen in an interview stating that he found it “odious, unpleasant, a waste of life.” When he won a second Best Actor Academy Award, for “The Godfather” he wasn’t present, but sent a Native American woman to make a speech.
Only once, in 1961 Marlon tried his hand at directing with “One Eyed Jacks”, which oddly, isn’t mentioned in the new documentary. This was a very good film, shot in expensive VistaVision, and which the perfectionist Marlon spent forever, shooting and editing, costing the studio vast sums. It’s largely forgotten, but well worth seeking out.
In 1972 Bernardo Bertolucci brought him back to his beloved Paris, a place he had visited all his life, to make “Last Tango in Paris”. The 30 year old Bertolucci set Marlon free to express himself, and Marlon revealed himself so nakedly that he swore never to show such vulnerability again. He created a monolog where he talked about his own childhood. Bertolucci now says, “I thought he was the most extraordinary actor and person I would ever come across in my life, and I was right.”
Brando had an early retirement from Hollywood, because of being difficult to work with, but had a spectacular comeback in 1979 , thanks to Francis Ford Coppola, casting him in “Apocalpyse Now”, which won four Oscars, and the Palme d’Or at Cannes Film Festival, plus many other major world awards.
In 1989 he made his final film, “The Dry White Season” and was again nominated for an Academy Award.
In Marlon’s old age, he became grossly over-weight, and experienced family tragedies, when his son Christian, long addicted to alcohol and cocaine, shot his own half-sister’s lover. Not long after, Marlon’s half-Tahitian daughter committed suicide. She had stated that she was “always the sacrificial lamb for Marlon Brando.”
He died ten years later, at age eighty ten years ago, in 2004, ‘having paid the highest price,’ says the documentary film.
This excellent film ends by asking, “Can a man be the greatest actor who ever lived, despite himself?” However it remains true that Brando re-wrote the history of film acting and his influence and legend will never die.

NOTE: (added March 2017) “One Eyed Jacks” has now been lovingly and appreciatively restored from the original negative, by Martin Scorsese’s Foundation for the preservation of films. Released once again on DVD and BLU ray, after a very long period languishing in “the public domain” and found only in very poor quality DVDs in discount stores. The Blu Ray experience is superb and the gorgeous Monterey, California locations are stunning. The acting of Brando, Karl Malden, the exquisite Pina Pellicer, Katy Jurado, and other famous names of the times, is faultless and the drama of the story with it’s many profound human issues never grows tired. I have watched this film many times, but this Blu Ray experience recently was the best for about 55 years, since the VistaVision print on the big screen. I bought it from the USA on Amazon.