This excellent 2013 film was shown on ABC TV tonight (Australia wide), a perfect choice to commemorate Australia Day  (26th January) because it’s directed by Ivan Sen ( indigenous Australian) and stars Aaron Pedersen ( also an indigenous Australian).  Both have done superb work here.  They are ably supported by Tony Barry, Hugo Weaving, Ryan Kwanten, Jack Thompson and other excellent actors. The film was shot in the vast horizontal landscape of outback Australia, Winton, QLD, and also in Ipswich and Moree.  The director, Ivan Sen did the cinematography, editing, and other major tasks usually assigned to others. No doubt there were budget limitations, but the look and quality of them film certainly do not look “low budget”. The visual concepts are superb. Vast flat landscapes and limitless skies…. silhouettes against the setting sun, contrasted with powerful close-ups of the faces of the excellent cast.  Aaron Pedersen, in his first starring role is superb playing an Aboriginal police detective, returned to his home town and investigating the death of a young girl.  Appearing in every scene, carrying the film on his able shoulders, his expressive face and eyes, do all the work while he maintains a very contained physical presence, fearful of  what he might find out, during his investigation.

As facts slowly emerge his situation becomes more and more tense, as he doesn’t know who he can trust, even amongst his own colleagues.

It’s a very intelligent and subtle film, which doesn’t spell out anything in an obvious manner.  It tackles an attitude that still (shamefully) exists today in this country — a lack of care and respect towards the Aboriginal community. There are but a few words of dialog revealing this theme, however the entire story tells us the situation.

The script, the way these Australian outback characters talk and act are authentic – circling each other warily, saying as little as possible in oblique conversations – watching each other like hawks.

This is a gripping piece of cinema, which on my second viewing tonight, revealed even more of itself.
Perhaps this was helped too, by having discussed it with  42 year old Aaron Pedersen, in December at The Asia Pacific Screen Awards. He told me that grew up in Alice Springs, and began his working life, as a journalist with the ABC, in Melbourne. He moved into acting in TV series,  and then had a role in the recent “Jack Irish”. He was Associate Producer on  “Mystery Road”, and his performance is very strong – we’ll be seeing more of him.

He recently made a short film called “My Brother Vinnie”. Vinnie is his disabled adult brother of whom he is carer. 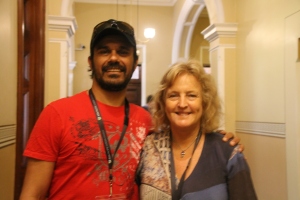 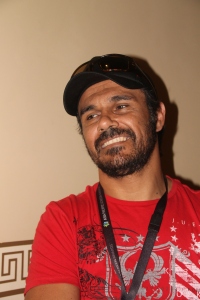 during APSA – a modest, compassionate man, who speaks humbly, and exudes intelligence, and has a very balanced outlook about what’s important in life.  I can’t wait to see him in his next film.
(review and photos by Cynthia Webb, and Caroline Russo)