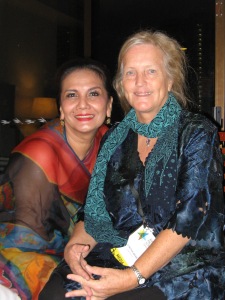 I was privileged to meet and interview Christine Hakim. She is one of the most beloved Indonesian cultural figures – an acclaimed actress, film producer, and someone who works for children’s rights, women’s rights, human rights. She has been part of  the history of Indonesian cinema and she is a woman of great beauty, intelligence, and generosity. She is especially famous for her role in “Tjoet Nja Dhien”(made in 1989, directed by Eros Djarot), where she played another heroine of Indonesia’s history.Tjoet Nja Dhien was a leader of  freedom fighters in Aceh (1896) – trying to defend their land against the Dutch colonial army.
I treasure the time spent interviewing Christine, at the the time this photograph of us both was taken by a friend of her’s She visited Gold Coast, QLD for the Asia Pacific Screen Awards when she was recognised for her great contribution, (as both actress and film producer) to Indonesian cinema.