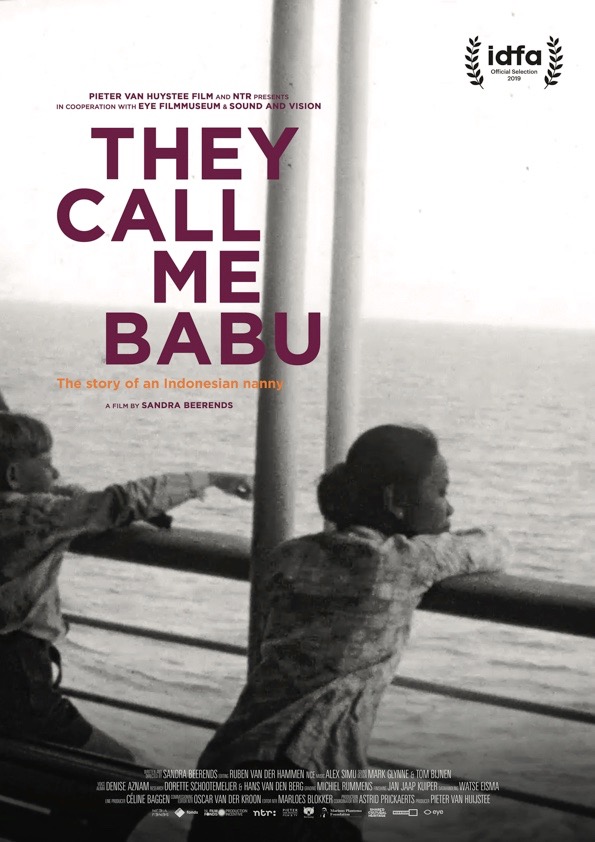 Infused with respect and an under-current of regret to the people of Indonesia from a Dutch woman film-maker, this documentary by Sandra Beerends is a very valuable work, a gift. Ms Beerends’ own mother had a ‘babu’ (the word is a combination of two Javanese words… Mbak (miss or sister) and Ibu (mother)and told her stories about her own childhood nanny. To prepare the film Ms Beerends talked with many people from Dutch families who had a babu to care for the children. Ms Beerends and her collaborators spent a huge amount of time viewing archival footage and creating this artful concept for a beautiful documentary, which plays almost like a feature film.I would imagine that choosing footage, and marrying it with the story would have been a task which was a two-way interaction, with each aspect taking priority at different stages.

Ms Beerends has written the story of Alima, a fictitious young Javanese girl who was embedded in a Dutch family, living and working with them as a babu for several years until 1942. That’s when the Japanese invaded Indonesia, causing upheaval for the Dutch, and promising the Indonesians “liberation”/merdeka, a promise they did not fulfill. Things got worse, not better. Alima suddenly found herself alone again when all of her Dutch family were suddenly taken to prison camps and their house seized by the Japanese.
Babu Alima had even returned to Holland with them during her time working for the family…On the journey she learned a lot about the world beyond Java, and marveled at how the Dutch family ‘behaved the same everywhere, as if the world belonged to them.’ She also learned that servants in Holland were entitled to one day off a week, something which was denied to her by the same family, when in Java – “Different rules apply here,” she was told curtly upon their return.

They had arrived in the Netherlands in winter, and she wore a winter coat over her batik kain (sarong) and a beret as she walked Jantje in his pram around the snowy streets, and stared in wonder at ice skaters on the canals. It was so bleak and cold and stern, an extreme contrast to her sunny, warm and gentle homeland. As the family are leaving Holland after three months, they travel to Genoa by train, passing through Germany, where we see the ominous sight of a Nazi swastika flag flying from a building beside the River Rhine.

When they all returned to Java, Alima saw her home with new eyes. She was changed forever, and no longer fitted so seamlessly in her own culture.

After the Japanese took control, Alima worked for a while with a wealthy Chinese family whom she found cheerful and kind, but difficult to get used to, as they had such different ways than the Dutch family. She loved little Jantje and always missed him. She left and went to Jakarta.
There she met and fell in love with a young man, Ribut ( meaning noisy) who has freedom on his mind and is a follower of Sukarno. Just to see the footage of the young Sukarno speaking to his people, rousing their desire for independence, and other historic moments, including his arrival in Bogor at the Palace to take his place as first president of Indonesia, is inspiring and worth the price of the ticket to view this wonderful documentary film at home, as part of the “online” Sydney Film Festival of 2020.

The young couple return to his (and her) hometown Yogyakarta in Central Java, when the War of Independence begins after the Japanese surrender and departure, which was followed soon after by the return of the Dutch. Just imagine the immense dismay in the hearts of the Indonesians. It’s heartbreaking. Although the Dutch homeland had been occupied by the Nazis, they still hadn’t understood that they were doing the same thing in Java….for 300 years. But this time the Indonesians were determined to have freedom, and led by Sukarno they fought for and gained their independence in 1949, after having actually declared Indonesia a free nation on 17th August 1945.

This story told with compilation footage has a touching conclusion and contains some magical moments of joy for Alima and Ribut, although they lived through so much turmoil.

Alima’s life is a blend of the lives of many young Javanese women who worked as a ‘babu’ but is true to the historical facts and rings very ‘true’. Alima’s young life straddles the birth of a nation. It tells one woman’s story, a part of the colonialism that was no doubt also happening in many other countries in the era of colonialism by European countries of lands in the south.

The archival film is beautifully edited to complement the story and the pace is gentle and quiet in spite of the sometimes turbulent historical events.

The film-maker has been fortunate to find a Dutch family where it seems that the father was a home movie enthusiast and made a lot of documentation of his family life and the children growing up. As Alima is with the youngest child twenty-four hours a day, she is seen a lot in the first half of the film.

It has the same ‘energy’ of calm and softness that is typical of the Javanese culture, so refined and delicate, and the story is told through Alima’s eyes. The voice of the narrator and the words that Ms Beerends has written for her are perfect and feel ‘right’ to me, as someone who for twenty-five years has been close to the Javanese in modern times.

There are included a small number of out of context scenes that are actually shot in Bali not Java, however they won’t be noticed by many viewers unless they are Indonesians, and they still complement the narrative well. Some other footage is placed there for it’s metaphorical significance, such as the scene of the crocodiles being captured. It’s a vicious battle which we see before the final battle of the War of Independence. Another metaphor is the image of a somewhat greedy Dutch man on board the ship, taking three large spoonfuls of rice for his own plate, under the unsmiling, and disapproving gaze of an Indonesian waiter.

I very much hope that Indonesians will be offered the opportunity to see this beautiful film. I think they will appreciate the recognition of their story and the empathetic and respectful way in which it has been told.