In 1968 the modern world caught up with an Indian tribal group called the Wayuu living in a remote part of northern Columbia. The powerful film “Birds of Passage” by Cristina Gallego and Ciro Guerra tells us the tale of the rise and fall of Rapayet ( Rafa) and the family he married into. They are members of the Wayuu tribal group living in the desert and still observing strong traditional customs that have served them well for all of their history.

The handsome young man Rapayet wishes to marry the pretty young daughter of the wise and dignified Matriarch of the tribe, Ursula. The film opens with a ceremony being held where he is asking permission to marry her, and performing certain customary duties. They look down on him as a poorer man from a lesser family, and ask for very large dowry to be paid for her, before she will be allowed to marry him. No doubt they think he cannot produce it and they will then find someone better, but his desire for this maiden is powerful.

He and his lifelong friend Moises are dealing in bags of coffee and some liquor, and have a sum of money, from a sale just completed. They are drinking together at a small roadside stall when the owner tells them something that changes their destinies forever. He points out some passing “Gringos” who want to buy a bulk amount of marijuana and asks them if they know how to get it. Not long after, a young American couple who are down in Columbia with the Peace Corps, sit down at the café. Rafa approaches them and makes an arrangement. He has a cousin who grows marijuana, who lives up in the green mountain region. There is quite a large group of Gringos, young hippies, smoking ganja and giving out pamphlets that read “Say No to Communism.” This appears to be their only work.
After the two men have made an arrangement with the Americans, Rafa tells his friend “Say yes to Capitalism.”

Rafa and Moises journey to the mountains to approach his cousin Anibal. Anibal is also very traditional, like Ursula, and is reluctant to deal with them at first, because of tribal and social differences, but when he sees the bundle of money, he agrees and provides the appropriate amount of sacks of marijuana. Rafa and friend deliver them to the Americans, and sit later watching them from a distance – commenting “Look at them. Weed is the world’s happiness”. Rafa corrects his friend , “No , it’s THEIR happiness.”

Now Rafa has the money to provide the excessive dowry demanded by Ursula, and marry the lovely Zaida, and we next see them, with their first baby in her arms.
So begins Rafa and Moises’ rise to undreamt of wealth and also the beginning of the notorious Columbian drug trade.

The film is divided into five Chapters, and we watch as Rafa’s children grow up, and we observe as the inevitable escalation of wealth and greed causes certain people to become reckless in what they are willing to do to keep their monopoly of the drug trade.

I should not tell you more – suffice to say that the fall of the two families, is inevitable too, and by 1980 we are introduced to the future – that the drug bosses will be hard headed businessmen in the city of Medellin from now on, rapidly leading to Pablo Escobar and the worldwide drug trade that we are familiar with today.

Meticulous anthropological attention is paid to showing us the traditions of the desert people, and their way of life. This plague of greed introduced by foreign influences has taken hold in the family, and it leads to the loss of their spiritual identity and trust in their connection to the land and old ways. It’s like when the Spanish conquerors came and introduced unknown evil diseases to South America.

The wide screen (2.35:1) expanses of flat golden land and wide skies are beautiful to behold, and then we see the bizarre white modern mansion, built with blood money standing there in the middle of the otherwise empty expanse. It has come to this – the family is imprisoned by their own fear in a luxury prison of their own making, haunted by menacing dreams and thoughts.
The performances are all faultless, by Carmina Martinez as Ursula, Jose Acosta as Rapayet, Natalia Reyes as Zaida, and Jhon Narvaez as Moises. Carmina Martinez is outstanding and she is the figure around whom everything revolves. She stoically insists upon the old ways and customs, and sums up the danger and what must be done, with clarity and dignity. She wears a necklace which shows her Matriarchal position in the tribe, and also carries a pouch containing a powerful talisman belonging to the entire population of Wayuu people.
My second viewing confirmed this film to be a rare work of cinema. The sound-scape created for the desert world and the music of the indigenous people, complements the rich and riveting experience. If you have the chance please see it on the big screen, for a powerful experience.

It is such a treat to see a film unlike any that we’ve ever seen before, which plays out like a Greek Tragedy that has emerged from the earth in another time and place.
Copyright – Cynthia Webb, Nov 2019
POSTER image – courtesy of the Producers 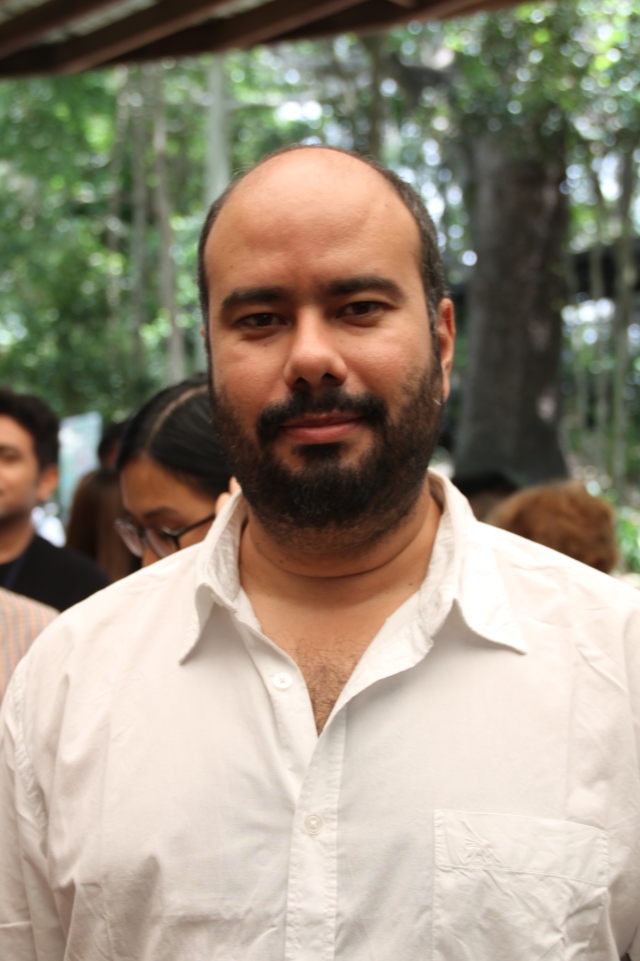 Photo: Ciro Guerra, co-director of “Birds of Passage” along with Cristina Gallego