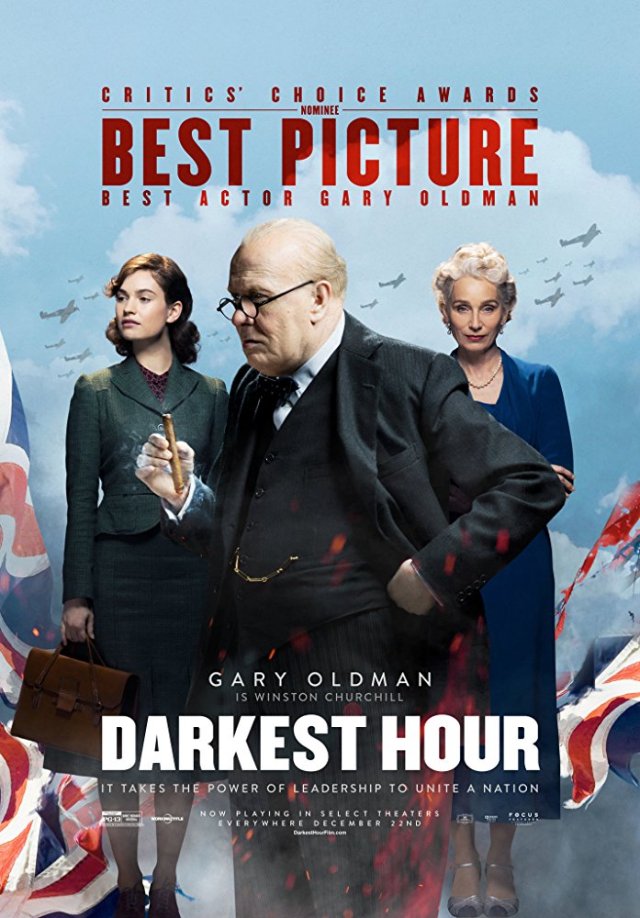 Pretty soon, this film will be collecting major awards on both sides of the Atlantic! “Darkest Hour” is the best film of a recent burst of Winston Churchill stories. He is a towering figure in the history of the 20th Century. Early on, he got the blame for the Allies’ ignominious failure at Gallipoli in the First World War. At the age of 65, he was made Prime Minister of Britain ( 1940) when Neville Chamberlain was forced to resign, he made up for it. That early failure haunted him apparently, and so it must have been weighing on him so much when in May 1940, the British Isles were under serious threat, Europe was already Hitler’s and Britain was hopelessly ill-prepared for the war they had to begin to fight immediately. No help was forthcoming from the USA, who declared themselves “neutral” at the time. Between the 26th May and 4th of June the Dunkirk evacuation occurred, using mostly civilian pleasure craft, and fishing boats – a citizen navy. This was Churchill’s only possible way to get 300,000 British soldiers back home from now surrendered, and occupied France. I hope everyone has seen “DUNKIRK” last year, so I don’t need to elaborate about that.
The film, “Darkest Hour” is directed by Joe Wright, who has touched on the Dunkirk evacuation before, in his film “Atonement”. This for me is his best film yet though. The performance of Gary Oldman is stunning, and he’s in every scene – commanding the screen, as well as the nation. He has already won the Golden Globe Best Actor Award.
His secretary is played very competently by Lily James. Kristen Scott-Thomas plays Churchill’s beloved wife Clemmie, who was his own tower of strength. All versions of the Churchill story, have implied that the nation owes a lot to Clemmie, the smart and brave woman in the background, (confirming the famous cliche).
The screenplay by Anthon McCarten is full of wry humour, brilliant dialogue, and consists of quite a lot of quotes from actual speeches by Churchill. Australia’s Ben Mendelsohn is superb as King George, with only a slight hint of the previously filmed “stutter problem” he had… (“The King’s Speech”), the man who was not meant to be king, but had to take on the role when his brother abdicated. He ended up doing his duty for his country with great courage and dignity, and was the father of our Queen Elizabeth II. Ben Mendelsohn even looks quite similar to the King, and his body-language is just right too. The film shows that he visited Churchill in his messy art studio, unannounced…. and told him he supported him. This moment was a turning point in this film anyway, for Churchill. I’m not sure if it actually happened. Nor do I know if the very moving scene where he rides the Underground to Westminster really happened, but it is a brainwave on the part of the screen-writer anyway. This is an important and powerful film, with all performances striking the right note, and the sentimental moments, not ending up being too mushy and weakening the enormous strength of this film.
It reminds us yet again, of the immense courage and strength of Britain in those darkest hours… when things looked so very bleak and hopeless, the leaders and the ordinary people found their pride, quiet dignity, and humility and gathered in their sense of humour too, and they withstood five more years of war. This included the Blitz, (nightly bombing of London) as the war this time, was air-borne, as well as on the ground. They were able to do it because their Prime Minister, Winston Churchill was able to communicate the sheer force of his will and courage into the nation, and without the aid of television!
I must admit, that this film roused my pride in my British heritage… On both sides of my family, going back many, many generations, all my forebears were mostly English and one-quarter Irish.
For those interested in history and politics, this film is a MUST see experience.
For those who appreciate superb film-making, this film is a MUST see too.
For young people who know next to nothing about those times, this film should also be compulsory viewing. It is necessary to know what your grandparents went through, and to therefore remind today’s generation of young people that vigilance is always necessary in Democracy, and that we need strong, intelligent, courageous leaders, whose first duty is to their country. Watch how you vote! What would happen if today’s leaders were suddenly catapulted into the sort of situation in which Churchill suddenly himself as the new Prime Minister. How many of them could match his leadership and instinct for the task in hand? These are the times when decency, breeding, education, courage and guts are what is called for.
Go and see this remarkable film.