APSA/BAPFF Fabulous Films and film-makers of 2016

Posted on December 9, 2016 by cynephilia

This film was nominated in APSA’S Best Feature Film category, and tells a cautionary tale for the whole world, not just the director’s homeland, Russia. The theme is the danger of religious fundamentalism. It is adapted from a German play by Marius Von Mayenburg. Kirill Sebrebrennikov is a big name in Russia and in Germany, who is based in the Gogol Theatre in Moscow and said that the theatre had performed the play for two years. For the film’s screenplay there is an extra layer of social commentary, and the setting is a Russian small town’s high school, where a highly intelligent student (played by Pyotr Skvortsov) becomes a fundamentalist in the Russian Orthodox religion. He begins to cause disruptions at school and at home, causing worry to his mother and major stress his teachers. His fanaticism grows worse, and a tragedy occurs.
The voice of reason and of science is embedded in only one character, a female science teacher (played by Viktoriya Isakov) who finds herself at loggerheads with this bright but misguided young man, and then with her colleagues and the school Principal. Actually, the message is that she is at loggerheads with the top leadership of Russia too. The finale is powerful, as she is the only one with the courage to stand up for common sense. She pleads with her colleagues, for common sense. Saying “He doesn’t belong here. I belong here.”
“The Student” premiered at Cannes in Un Certain Regard section. It screened for about seven weeks in Moscow cinemas, and won a music award in the 2016 European Film Awards.
Kirill explained that the rollout of Russian Orthodox religious teachings is becoming bigger and bigger. Priests now come to schools. They teach religious dogma, they ban things, they dictate the dress code and moral code.
The Producer, Ilya Stewart who has lived all his life in Russia, although he has an Australian parent, said that the feeling of the days of the Soviet Union are coming back.
“The church goes not only into my brain but also into my pants,” said the director, Kirill, who when asked to explain said he meant said they are not only telling people how to think but dictating the standards for one’s sex life too.
“I do not want to divide the world into parts. I want to belong to all of the world,” he said. His fear is that if each nation’s people sink deeper into their particular religious teachings, and become closed-minded, there will be a bleak future for our world. The film unfortunately offers no solution, but who can be expected to come up with that? This is the oldest and also the contemporary problem for Humanity.

Photo below:  Left, Ilya Stewart (one of the producers) and Kirill Serebrennikov (Director) of The Student. 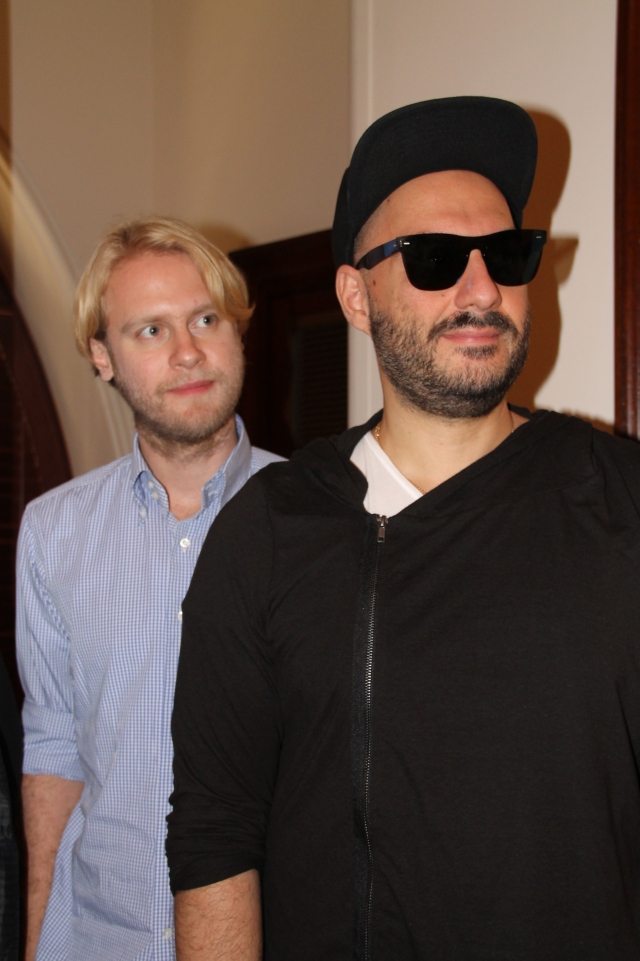