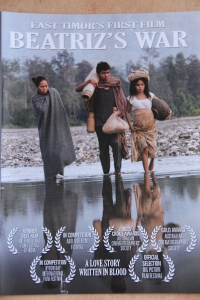 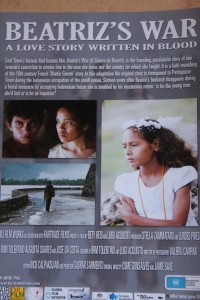 It seems necessary to mention that the plot-line in the second half of the film “Beatriz’s War” is inspired by the 1982 French film, starring Gerard Depardieu and Nathalie Baye – “The Return of Martin Guerre”. Audiences watching who’ve seen that film, or the American re-make starring Richard Gear and Jodie Foster, will realize this, once Beatriz’s husband comes home from the mountains, half way through the film. However, this doesn’t much matter, because this is the point at which the film starts to gain a good deal of interest, and drama. Also,“The Return of Martin Guerre” is mentioned in the notes on the DVD cover, and the trial of Martin Guerre actually happened in sixteenth century France.

Up until that point, the horrific times that the people of East Timor actually suffered under the occupation of the Indonesian army, (TNI) 1975–1999, are portrayed in a rather weak style, with little or no tension. The scenes involving rape and violence are handled “off-screen” and we are told what happened in an oblique kind of way, by seeing the results but not the actual events. Perhaps this is the Timorese way of approaching such confronting memories still vivid for them, or perhaps it is inexperience in film-making. The first half of the film is somewhat ‘plodding’ and lacks drama, although the events happening should feel very powerful.

The real drama begins when Beatriz’s husband Tomas returns. Now the situations become truly complex and fascinating, and the drama is in our minds, while we identify with the protagonists in their complex emotional as well as practical situation. A very long time has passed, and they have all endured much and changed from very young adults, to be adults who have faced every tough reality war can bring.

During that past time, the women, led by Beatriz, realized collaboration was their only remaining course of action, because their primary responsibility, in their own eyes, was to survive. When the “Martin Guerre” figure comes into their lives, they suspect him, and yet also want to believe in him. As time passes new facts are revealed and they call him a traitor it’s interesting because they too have crossed boundaries and nothing is simple anymore.. perhaps they too have been traitors?

Now the story is a web of twists and turns, of ethics and empathy, forgiveness and still about survival too. All this has to be balanced with traditional “old ways”, which the returned soldier claims to no longer believe in. He says that he found God in the mountains, wherehe was with the Falantil (Freedom fighter).

There are some interesting traditional rituals shown or mentioned, and the cast is made up of Timorese people, often wearing their superb traditional hand-woven ikat textiles. The locations in Timor-Leste are beautiful, and give a lush look to the film, which makes it appear to have a much bigger budget than it actually had. (I read in a Sydney Morning Herald review that it was made for only about $200,000. Thanks to their reviewer.)

Congratulations to the film-makers, and all involved for bringing to the screen, a personal story of one family and their village, that gives audiences an indication of what those twenty-four long years of suffering were like.

Apart from the Portuguese, (whose colony this little country was, for 450 years,) and Australians (close neighbours), and Indonesians, most people in the world probably don’t even know where Timor-Leste is).

The East-Timorese were at last offered a Referendum. They could choose either, Autonomy within Indonesia, (a big concession for the Indonesian government, in view of their terror of their relatively young nation (independence declared in 1945) going the way of the ex Yugoslavia), OR option two was total freedom to form their own nation. Although it would be the weakest and poorest nation on earth, the East Timorese overwhelmingly voted for freedom, of course. This opportunity only came about because President Suharto’s military dictatorship was at last over-thrown in 1998 and the new President Habibie had so many problems, it appeared that this was one problem he decided to just get rid of by permitting the Referendum.

The Catholic people of East-Timor couldn’t imagine being part of majority Islamic Indonesia, not after their 24 year experience with the TNI. During the occupation, the Indonesian people mostly had no idea what was happening in the distant far east of their island nation, where the army was a law unto itself.There was no freedom of the press back then.

(Although this historical information isn’t a “film review” it’s helpful to understand something about the situation, when watching the film.)

“Beatriz’s War” is the first full length feature film made in Timor-Leste. There was an interesting documentary film a few years ago, by Victor de Sousa Pereira…. called “Uma Lulik – a Casa Sagrada”. As with everything in East-Timor, (a nation of brave people that began from the ashes after the aforementioned referendum,) the film-makers have had a lot of help and support. Before the Indonesian army departed their country, they destroyed everything they could, buildings, infrastructure – in one last spiteful and unnecessary act.

I might mention that the name of General Prabowo Subianto was mentioned not once but three times in the film’s dialogue, and in July 2014 that same man was one of the two candidates who ran for President of Indonesia. (He did not win.) Many Indonesians and others too, were of the opinion that he was an un-tried war criminal, and a relic of the “bad old days under the Suharto regime, whose son-in-law he once was, as well as being Head of Kopassus, (TNI elite forces.) It would seem that the people of Timor-Leste haven’t forgotten him and never will.

The film is not any kind of masterpiece, but please watch it if you get the chance because it is well worth your time – especially in the second half. It is always interesting, and we owe it to the people of Timor-Leste to learn about their experience in such recent times, when the world abandoned them, in favour of political expediency, giving secret approval to the 1975 invasion by the Indonesian army, and then pretending not to know what was going on there for the following 24 years.