Anthony Chen and the film that took over his life

When I interviewed Anthony Chen, (29 years old) from Singapore, he came across as a young man inspired, despite struggling with jetlag, induced by months of world-wide travel.Since his film “Ilo Ilo” had it’s premiere at Cannes and went on to win the Camera d’Or, in May 2013, his life changed. Camera d’Or is awarded for the best film from a first time director.
Anthony has been to a staggering list of countries and still has a promotion schedule until at least April 2014. He recently signed a contract with a Hollywood agent, and has received several scripts for consideration.

He wrote, produced and directed “Ilo Ilo” and says that once he was the driver of his film but now it’s driving him.

“Ilo Ilo” is the story of a typical Singapore family and their Filipina maid, Teresa. The pre-pubescant son seems to be rather a naughty boy, but he just needs more love and attention. His parents love him, and each other, and his mother is pregnant again. However it is 1997, and the Asian financial crisis has hit them hard. The father has lost his job. Teresa has a young child of her own back in the Philippines, being cared for by her sister, but after some initial resistance she and the boy form a close bond.

It is superbly written, acted, directed,edited, and always sustains your empathy with these people.

Some readers will be aware that many Singapore have maids from Indonesia or the Philippines. Filipinas are more popular and more expensive, because they speak good English.

Anthony told me, “Many people have commented that this is the first time in any film, not only Asian, where a made has been humanized and is an important character in the film. Usually, they just open the door, say good morning and come in with a cup of tea.”

When the film premiered in Singapore, it out-grossed all previous Singapore-made films ten-fold, and even inspired a social group called “Project Ilo Ilo”. The members collected financial donations and on Sundays (the day-off for domestic workers) they bought tickets to the film and gave them to the maids of the city.

I asked Anthony when he first knew he wanted to be a film-maker.
He said, “When I was in school I was performing in children’s theatre, but I was struggling to understand William Shakespeare. I just didn’t get this guy!
So I knew that if I couldn’t connect with the greatest playwright who ever lived, then I couldn’t go into theatre.”
“When I was about fifteen, I had the chance to see Italian and French films and it was a revelation for me that films could be like that. I’d only seen Hollywood films until then, such as “Jaws”, or Singapore films. I had a new email address, so I began to write to every film-school I could find online, asking how to get in, and how much the fees were. I found out that it was more expensive than going to medical school or law school. We Singaporeans are very pragmatic, and I realized that my parents couldn’t afford this.”
He had not told his parents about his new ambitions, not wanting to cause them to worry during this time of financial crisis.
Anthony at last found out that there was a place in Singapore where he could learn film-making skills although it was more like vocational training than a course at an international film school.
When he broke the news, his father and extended family said it was quite ridiculous and that he should continue with tertiary studies and get ‘proper work’. However, his mother was quite supportive and said, “Well, whatever you do, you’d better be sure to do it well.”
He did, and has now graduated with a Master of Arts in Directing from the National Film and Television School in the United Kingdom.

Anthony describes himself as rather obsessive-compulsive when he’s filming and when he cooking.That’s his other hobby. He said that he often drove all over the city, trying to find a certain prop or costume.

The film took up three years of his life. Two years writing the screenplay and a year spent filming. The commitment for Anthony has become at least another year for promotion. This is because “Ilo Ilo” has been so successful that it has been picked up for distribution in a large number of countries. Neither he nor any of the cast or crew thought their “humble and delicate film” would ever win such a prestigious award as the Camera d’Or, let alone the fifteen awards that followed, at about twenty film festivals. After the Cannes Film Festival, it showed in the Paris Film Festival, and then later opened in 110 cinemas in France. The film was Singapore’s official submission to the Academy Awards, and made it to the “short-list”. At December’s Asia Pacific Screen Awards (APSA), in Brisbane, he won Best Director, in competition with world class film-makers.
(Three award winning films from APSA 2013 are in the Academy Awards Nominations for 2014.)
Anthony said that he was amazed that his film won, in a category where his idol, Hirokazu Kore-Eda (Japan) was also nominated, for “Like Father, Like Son”. Anthony also said that he has a few worried moments, wondering how he can follow on from the success of “Ilo Ilo”, and realises that something like this doesn’t happen very often.

At home in Singapore, mystified journalists keep asking him why the film is winning awards everywhere.
“They think it is just a little movie about ordinary people. They cannot see why it is special,” he said.

However, many films that have won the world’s foremost awards are exactly that,such as “A Separation”, by Iran’s Asghar Farhadi, which Anthony loves. However he says “Farhadi’s film is much more hard-hitting. “Ilo Ilo” has a more Asian sensibility – it’s more subtle.” 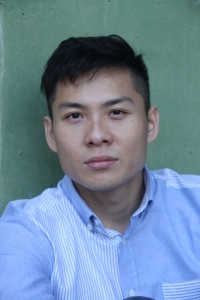 The authenticity of “Ilo Ilo” no doubt comes from the fact that so much of it is based on Anthony’s own experiences.

If you’re wondering about the title, Anthony’s family also had a Filipina maid who took care of him when he was a child, and she came from Ilo Ilo in the Philippines.
“It’s such a cute name,” said Anthony.

Article and photo by Cynthia Webb